The mayor of Key West and the Cuban captain-general exchange messages on the new United States to Cuba undersea telegraph. 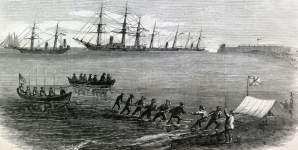 The cable ship Narva had begun the process of laying the submarine portion of the International Ocean Telegraph Company's telegraph line between the United States and Cuba on August 3, 1867 when it landed the American end on South Beach, near Key West, Florida.  Two days later, the Narva landed the Cuban end near Chororra on the island. Complications with a cable break during the actual laying then ensued but the line was completed on August 17, 1867. Its first messages, between the mayor of Key West, E.O. Gwynn, and Joaquin del Monzana, the Spanish captain-general of Cuba in Havana were exchanged on this day. During September 1867, the underwater cable from Key West to Punta Rassa, Florida was laid and Havana could communicate directly with Washington, D.C. (By John Osborne)

How to Cite This Page: "The mayor of Key West and the Cuban captain-general exchange messages on the new United States to Cuba undersea telegraph.," House Divided: The Civil War Research Engine at Dickinson College, https://hd.housedivided.dickinson.edu/index.php/node/47631.