The cornerstone of the new City Hall is laid in Baltimore, Maryland. 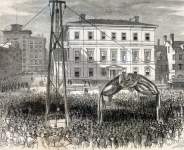 In a ceremony with almost city officials present, the cornerstone for the new Baltimore City Hall was laid in the Maryland city.  The new structure, with its frontage on Fayette Street and constructed of locally quarried white marble, would take eight years to complete and was officially opened on October 25, 1875.  (By John Osborne)

How to Cite This Page: "The cornerstone of the new City Hall is laid in Baltimore, Maryland.," House Divided: The Civil War Research Engine at Dickinson College, https://hd.housedivided.dickinson.edu/index.php/node/47692.