Edward Payson Weston reaches Chicago on his 1238 mile walk from Portland, Maine with a day to spare. 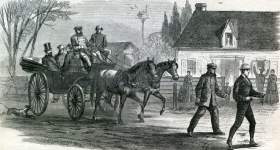 Just after nine in the morning of Thanksgiving Day, twenty-eight year old Edward Payson Weston reached the Chicago, Illinois city limits.  He had engaged in a wager for $10,000 with gambler T.F. Wilcox that he could walk from Portland, Maine to Chicago in thirty consecutive days, excluding Sundays.  He had left Portland at noon on October 28, 1867 and had therefore won the bet by a full day.  The entire walk was extensively followed in the regional and national press, and when Weston reached Chicago to an excited welcome from around 50,000 people, a fifty-man police escort, and a brass band, he was already a household name.  The feat was crucial to the rise of the remarkable popularity in the following decades of what was called "pedestrianism," one of nineteenth century America's most popular spectator sports. (By John Osborne)

How to Cite This Page: "Edward Payson Weston reaches Chicago on his 1238 mile walk from Portland, Maine with a day to spare.," House Divided: The Civil War Research Engine at Dickinson College, https://hd.housedivided.dickinson.edu/index.php/node/47703.