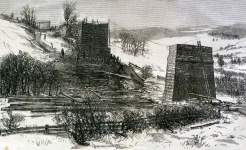 On the Vermont Central Railroad, the Harlow Bridge had burned three days before and almost a hundred workers were engaged in constructing a trestle across the surviving abutments.  After lunch in nearby Northfield, Vermont, ninety workers were returning to the site by work-train when its engineer misjudged his speed and, although the locomotive stopped in time, its packed single car broke free, fell through the gap, and smashed into the ravine below, killing fourteen workers and injuring many others, one of whom did not recover. (By John Osborne)