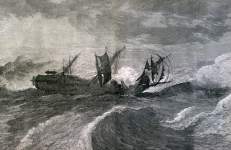 Prince Alfred, Duke of Edinburgh, Queen Victoria's second son, was on an extended naval "tour" in command of H.M.S. Galatea, a wooden 280 foot steam sloop of 4,600 tons, with a crew of 450 men.  The vessel had recently visited South Africa and following ceremonies and big-game hunting there had departed Capetown for the next official port of call in Adelaide, Australia.  Crossing the Indian Ocean, the Galatea was struck by a typhoon around midnight and had to fight hard to survive through the night.  She did so and safely made harbor at Adelaide on October 30, 1867.  In March, 1868, while in Australia, the 24-year old Alfred survived an Irish nationalist assassination attempt in Sydney and made a full recovery from a bullet wound in his back.  (By John Osborne)