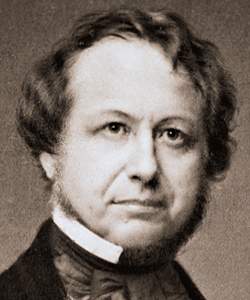 William Bigler and his older sibling John Bigler, third governor of California, were the first brothers to serve at the same time as chief executives of two states. He was born on January 1, 1814 to Jacob Bigler and Susan Dock Bigler near Spring Township, in what is now Perry County, Pennsylvania. Without means, he was tutored by his elder brother and eventually prospered in the newspaper business, first with the Centre County Democrat and then with the Clearfield Democrat. He married Maria J. Reed in 1834 and in time they had five children. In 1841 he became involved in state politics as a Democrat, sitting as a Pennsylvania state senator from 1841-1847 and serving several terms as Speaker of the Senate. In 1851 he ran against and unseated the incumbent Whig governor William F. Johnston. Though personally opposed to slavery, he enforced the Fugitive Slave Law and loyally supported President James Buchanan's efforts to placate southern sectional fears in Kansas and elsewhere. This contributed to his defeat at the hands of Whig nominee James Pollock in 1854. He was elected to the U.S. Senate in 1855, and again served one term before Republican Edgar Cowan defeated him in the 1860 election. He continued to contribute to Pennsylvania politics, serving at the constitutional convention in 1873 and helping to organize the 1876 Centennial Exhibition in Philadelphia. He died in Clearfield, Pennsylvania on August 9, 1880 and is buried there in the Hillcrest Cemetery. (By Andrew Fink)
Life Span
01/01/1814 to 08/09/1880
How to Cite This Page: "Bigler, William," House Divided: The Civil War Research Engine at Dickinson College, https://hd.housedivided.dickinson.edu/index.php/node/5100.