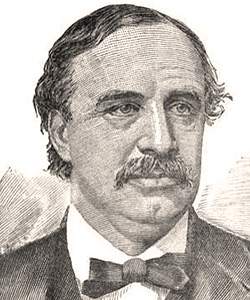 Henry Villard arrived in the United States in 1853 speaking no English but within ten years was a respected Republican journalist and war correspondent. Born Ferdinand Heinrich Hilgard on the banks of the Rhine, his father was a successful lawyer who eventually sat on the Supreme Court of the Kingdom of Bavaria. Villard attended university in Munich before falling out with his family and emigrating to the U.S. on borrowed funds while still a teenager. He arrived in New York, anglicized his name, and made his way to the Midwest. He edited a German newspaper in Wisconsin, studied law with Lyman Trumbull in Illinois, and then taught school for a year in Lebanon County, Pennsylvania before he settled as a journalist. By now thoroughly opposed to slavery and supporting the Republican Party, the 23 year old Villard’s first national assignment was reporting on the Lincoln-Douglas debates in Illinois in 1858. He represented the Associated Press in Springfield in 1860 and when war broke out he became a war correspondent, witnessing many of the momentous battles of the war, including Bull Run, Fredericksburg, and the Wilderness. Following the conflict, he married a daughter of William Lloyd Garrison and went into the railroad business in Oregon. He travelled frequently to Germany, where he handled German investments in America and represented the Deutsche Bank in the U.S. He later expanded his influence, purchasing the New York Post and forming the Edison General Electric Company. He died a wealthy man in New York in 1900. (By J. Osborne)
Life Span
04/10/1835 to 11/12/1900
How to Cite This Page: "Villard, Henry," House Divided: The Civil War Research Engine at Dickinson College, https://hd.housedivided.dickinson.edu/index.php/node/6777.