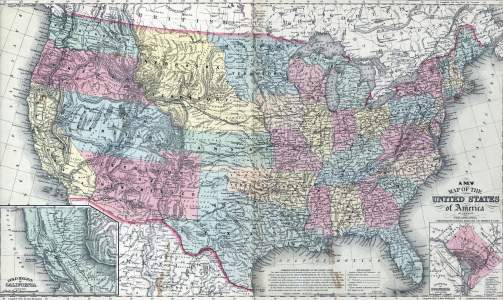 Wabash River, la., rises in Darke co., O., flows N.W. into Huntington co., la., where it receives Little River, which rises near the junction of the head branches of Maumee River. It then crosses the state in a S.W. direction, receiving Eel and Tippecanoe Rivers on the N. and Salamanie and Missisinewa Rivers on the S. side, and a little below Terre Haute it takes a more S. direction forming the boundary between la. and Is., until its entrance into the Ohio, 68 miles above the mouth of Cumberland River, and 127 miles above the Mississippi.… It connects Lake Erie with the Ohio River by means of the Wabash and Erie Canal. Steamboats ascend it to Lafayette. (Gazetteer of the United States of America, 1854)
How to Cite This Page: "Wabash River," House Divided: The Civil War Research Engine at Dickinson College, https://hd.housedivided.dickinson.edu/index.php/node/9252.