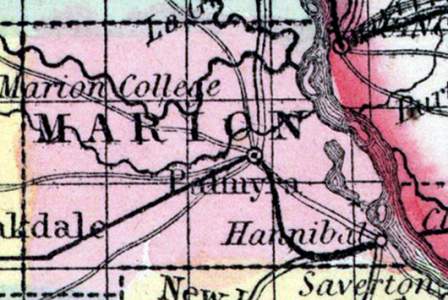 MARION, a county in the E. N. E. part of Missouri, bordering on the Mississippi river, which separates it from Illinois, has an area of 432 square miles. It is traversed by the North and South Fabius rivers, and by the North Two river, and also drained by South Two river. The surface is somewhat diversified, and consists of undulating prairies, and forests which are distributed along the larger streams. The prairies have a deep, rich soil, free from stones, and covered with a profusion of flowers. Indian corn, wheat, oats, hay, hemp, cattle, pork, and butter are the staples. In 1850 this county produced 668,653 bushels of corn; 105,811 of wheat; 65,384 of oats; 4585 tons of hay, and 499 of hemp. It contained 23 churches, 2 newspaper ofnces, 1436 pupils attending public schools, and 277 attending other schools. Bituminous coal and saltpetre are found in the county, and limestone .and freestone are abundant. A railroad is in progress of construction through the county from Hannibal to St. Joseph on the Missouri river. Capital, Palmyra. Population, 12,230, of whom  9398 were free, and 2832, slaves.  (Baldwin & Thomas, A New and Complete Gazetteer of the United States ... 1854)