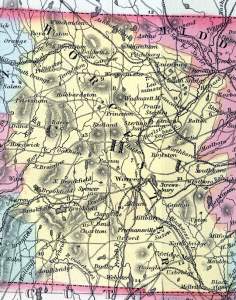 Oxford, Ms., Worcester co.... The soil is strong and fertile, and under good cultivation. About three quarters of a mile W. from the plain, on which is a large and handsome village, runs French River, from the N. to the S., and falls into the Quinebaug. This river (so named from the first settlers) and its tributaries give to Oxford a great hydraulic power. Woollen and Thread Villages, about a mile apart, on French River, are important manufacturing places. The Norwich and Worcester Railroad passes through the town. (Gazetteer of the United States of America, 1854)
How to Cite This Page: "Oxford, MA," House Divided: The Civil War Research Engine at Dickinson College, https://hd.housedivided.dickinson.edu/index.php/node/15119.