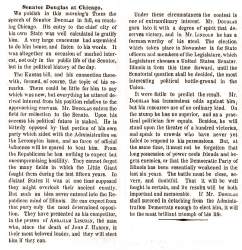 This article from the Republican New York Times explains the political situation in Illinois, a contest the Times describes as of “…extraordinary interest,” focusing especially on the incumbent Stephen A. Douglas. The Times explains the contenders arrayed against him in his own party and among the Republicans. New York’s paper is kind in its descriptions of the Senator’s oratorical prowess. (By Brendan Boston)
How to Cite This Page: "New York Times, "Senator Douglas at Chicago," July 13, 1858," House Divided: The Civil War Research Engine at Dickinson College, https://hd.housedivided.dickinson.edu/index.php/node/16382.