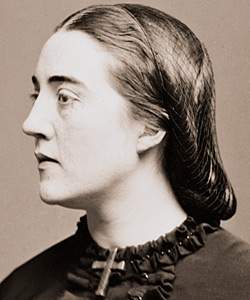 Rose Adèle Cutts was a famous Washington beauty who became the loyal and valuable second wife of Stephen Douglas. She was born in the capital in December 1835, the daughter of James Madison Cutts, nephew of Dolley Madison, and Eleanora O’Neale, from a prominent Catholic Maryland family. Tall, with chestnut hair, and universally acclaimed beauty, “Addie” grew up under the tutelage of her great-aunt and could not help but emerge as a poised and popular figure with a keen political mind. When she was just twenty she met the widowed Stephen Douglas, and though he was more than twice her age, they courted briefly and were married in a Catholic ceremony in November 1856. She had a transforming effect on the somewhat disheartened Illinois senator and their house became a center of the Washington social scene. She was at his side during the debates in Illinois and in the presidential campaign that followed in 1860. When Douglas died in Chicago in June 1861, Adèle never entertained again and went into extended mourning. Following the Civil War she met and married a Union officer from Virginia named Robert Williams and took on the life of an army wife. She had a miscarriage and then lost a baby daughter with Douglas; with Williams she reared six children during his long career which he ended in 1893 as Adjutant General of the Army. Adèle died at her home in Washington in January 1899 and was buried in Arlington National Cemetery. (By John Osborne)
Life Span
12/27/1835 to 01/26/1899
How to Cite This Page: "Douglas, Adele Cutts," House Divided: The Civil War Research Engine at Dickinson College, https://hd.housedivided.dickinson.edu/index.php/node/16443.