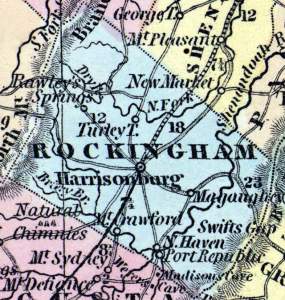 ROCKINGHAM was formed in 1778... The western part is very mountainous, and the Peaked mountains lie between Harrisonburg and the Shenandoah. Much of the soil is extremely fertile, and the farming economical and judicious. A large portion of the population is of German origin, and many still speak that language. Pop. in 1840, whites 14,944, slaves 1,899, free colored 501; total, 17,344. (Historical Collections, 1852)
How to Cite This Page: "Rockingham County, VA," House Divided: The Civil War Research Engine at Dickinson College, https://hd.housedivided.dickinson.edu/index.php/node/17888.