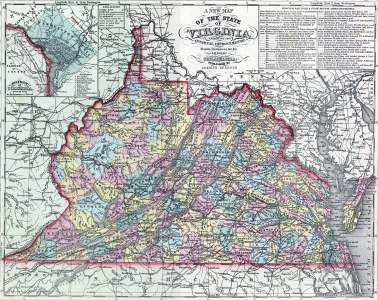 Virginia is now divided into 119 counties. Its seat of government is the city of Richmond, and its greatest commercial port is Norfolk. There are many other cities and populous towns in the state, more particular descriptions of which will be found in their proper order in this volume. Within even its present boundaries flow some of the finest rivers in America, the most important of which are the Potomac, Rappahannock, James, and Kanawha Rivers. It is also watered by the Ohio and its tributaries on the west. The surface of the state is greatly diversified; insomuch that those familiar with its topography have considered its soil and climate under several distinct zones or divisions. (Gazetteer of the United States of America, 1854)
How to Cite This Page: "Virginia," House Divided: The Civil War Research Engine at Dickinson College, https://hd.housedivided.dickinson.edu/index.php/node/8986.