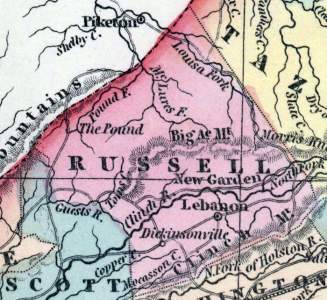 RUSSELL was formed in 1786... The principal portion of the population is included between Clinch mountain and a distance of 15 miles from its base. The northern, and a greater portion of its territory, is so mountainous, sterile, and difficult of access, that its inhabitants are few and far between. There are some rich sections of land in Russell; and its mineral wealth — coal, iron ore, marble, &c. — is considerable. About 100,000 pounds of maple sugar are annually produced in the county. Pop. in 1840, whites 7,152, slaves 700, free colored 26; total, 7,878. (Historical Collections, 1852)
How to Cite This Page: "Russell County, VA," House Divided: The Civil War Research Engine at Dickinson College, https://hd.housedivided.dickinson.edu/index.php/node/18121.