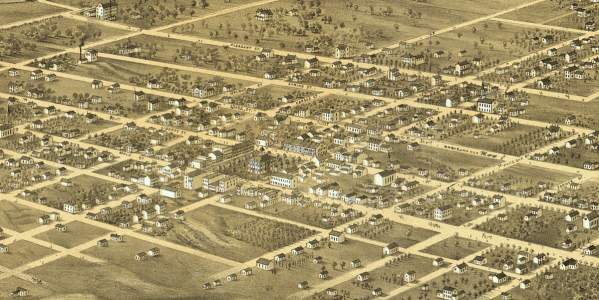 INDEPENDENCE, a thriving town, capital of Jackson county, Missouri, is situated 5 miles S. from Missouri river, and 165 miles W. by N. from Jefferson City. It is important as one of the starting points in the trade with New Mexico and Utah, and a place where many of the emigrants to Oregon and California procure their outfit. It is the centre of trade for a considerable extent of the surrounding country, which is extremely fertile. The prodigious tide of emigration which has passed through this place for about four years past, has created a demand for horses, provisions, and merchandise, at prices which have enriched the farmers and traders of this vicinity. It contains several churches, 3 hotels, and 2 newspaper offices. A railroad extends from the town to the river. Population in 1853, estimated at 2500. (Baldwin & Thomas, A New and Complete Gazetteer of the United States ... 1854)

INDEPENDENCE, The county seat of Jackson county, Blue township, is beautifully situated about four miles from Missouri river, 300 miles from St. Louis, and 150 from Jefferson City.  It contains six churches, viz., Missionary Baptist, Baptist, two Methodist, one Christian and one Presbyterian church.  The Masons have a Lodge, viz., Independence, No. 76, and the Odd Fellows, Chosen Friends Lodge, No. 21, and Occidental Encampment, No. 9.  The following are the different stage lines running from this city, by the Missouri Stage Company, from Independence to Syracuse, 135 miles, to Kansas City 14 miles, to Leavenworth 50 miles, to St. Joseph 85 miles, to Liberty 12 miles, and to Cameron, connecting with the Hannibal and St. Joseph Railroad, 50 miles, per Moore & Walker's stage route to Syracuse, via Pleasant Hill, 116 miles, per Hall & Porter's stage route to Santa Fe and New Mexico, 890 miles.  Independence supports three good newspapers, viz., the Democratic Gazette, published by N.R. McMurry and A.B. Hazzard, issued every Thursday.  The Occidental Messenger, published every Saturday, by Wm. Peacock, and the Independence Daily Herald, F.F. McMurry, editor and proprietor.  The chief productions of this section are corn, wheat, and help --- timber, walnut, oak, and cotton wood.  Cultivated land may be had from $25 to $100 per acre, and uncultivated $12.50 per acre.  (The Missouri State Gazetteer and Business Directory, 1860)