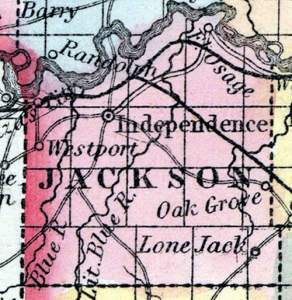 JACKSON, a county in the W. N. W. part of Missouri, bordering on Indian Territory, has an area of 612 square miles. The Missouri river (navigable by steamboats) forms its northern boundary ; the Kansas river enters the Missouri at the N. W. extremity of the county; it is also drained by Big Blue and Little Blue rivers, and by Snybar creek. The surface is undulating ; the soil is remarkably fertile, and well watered. Indian corn, wheat, oats, hay, hemp, cattle, horses, mules, and swine are the staples. In 1850 this county produced 938,309 bushels of corn; .55,856 of wheat; 124,363 of oats; 798 tons of hay, and 361¼ tons of hemp. It contained 14 churches and 2 newspaper offices, 1195 pupils attending public schools, and 236 attending academies and other schools. Limestone is the principal rock of the county. The streams furnish extensive water-power. The caravans engaged in the trade of Santa Fe and Utah obtain their outfit at this place, which furnishes a good market for provisions, horses, &c. Vast numbers of emigrants to California also take their departure from Independence, the capital. Pop., 14,000, of  whom 11,031 were free, and 2969, slaves. (Baldwin & Thomas, A New and Complete Gazetteer of the United States ... 1854)