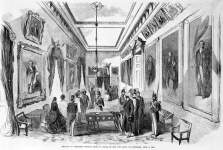 07/03/1858 - 07/04/1858
After laying in state at the City Hall, the body of President Monroe is taken from New York City, where it had rested in the Marble Cemetery since 1831, by steamship, "under the escort of the National Guard," to Richmond, Virginia where it is received on July 4 "with imposing ceremonies." Monroe will be reburied in the Hollywood Cemetery in the city. (By John Osborne)
Source Citation
The American Almanac and Repository of Useful Knowledge for the Year 1859, (Boston: Crosby, Nichols, and Company, 1859), 370.
How to Cite This Page: "President Monroe goes home to Virginia," House Divided: The Civil War Research Engine at Dickinson College, https://hd.housedivided.dickinson.edu/index.php/node/18473.