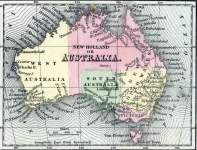 11/23/1852
The steamer Eagle arrived at the port of London carrying more than six tons of gold dug from the the Australian goldfields. The cargo's value was estimated at more than 600,000 pounds sterling. The Eagle had also broken the record for the fastest voyage from Australia to England, having left Melbourne just seventy-six days before. (By John Osborne)
Source Citation
Chronicle, The Annual Register or a View of the History and Politics of the Year 1852 (London: F. & J. Rivington, 1853), 196.
How to Cite This Page: "Six tons of bullion from the new Australian goldfields arrives in London," House Divided: The Civil War Research Engine at Dickinson College, https://hd.housedivided.dickinson.edu/index.php/node/20136.