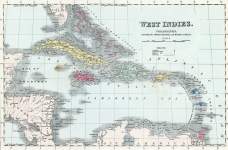 08/21/1858
The U.S.S Dolphin, with Lieutenant John Newlands Maffitt in command, after a long chase off the coast of Cuba, seized an American slave ship with 318 African slaves aboard. The 187 ton vessel was registered in New Orleans as the S.S. Putnam but was sailing under the false name Echo. The Echo sailed to Charleston, South Carolina where it arrived six days later. On August 29, 1858, the slaves landed at nearby Castle Pinckney. (By John Osborne)
Source Citation
The American Almanac and Repository of Useful Knowledge for the Year 1859 (Boston: Crosby, Nichols, and Company, 1859), 371.
How to Cite This Page: "U.S. Navy captures American slaveship with 318 slaves aboard ," House Divided: The Civil War Research Engine at Dickinson College, https://hd.housedivided.dickinson.edu/index.php/node/21625.