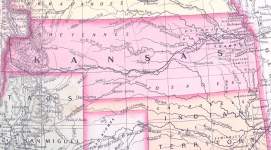 The Kansas Territorial Legislature passed the Convention Act, to frame a constitution in preparation for statehood. Fifty-two elected delegates from all over the territory met at Wyandotte, Kansas in early July. Three and a half weeks later, on July 29, 1859, the new document had been worked out and was signed. The Constitution was approved by popular vote in October 1859 and Kansas was admitted to the Union in January, 1861 as a free state.  (By John Osborne)

Source Citation
State of Kansas, Kansas Constitutional Convention: A Reprint of the Proceedings and Debates of the Convention which Framed the Constitution of Kansas at Wyandotte in July, 1859 .... (Topeka, KS: Kansas State Printing Plant, 1920), 7.
How to Cite This Page: "The Kansas Territorial Legislature calls a Convention to frame a State Constitution," House Divided: The Civil War Research Engine at Dickinson College, https://hd.housedivided.dickinson.edu/index.php/node/22713.