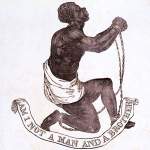 05/08/1859
The brig Rolesonsailed from Pensacola, Florida and during the voyage stowaway fugitive slave Columbus Jones was discovered and kept in chains.  At Hyannis, the captain and first mate of the Roleson negotiated with the captain of the schooner Elizabeth B. to transport Jones to Norfolk, Virginia for a fee. When this became known locally, they were arrested for kidnapping, indicted by a grand jury in Barnstable, and tried the following November. They were acquited. (By John Osborne)
Source Citation
Samuel May, The Fugitive Slave Law and Its Victims (New York: American Anti-Slavery Society, 1861), 118-119.
How to Cite This Page: "Fugitive slave stowaway Columbus Jones arrives in chains at Hyannis, Massachusetts," House Divided: The Civil War Research Engine at Dickinson College, https://hd.housedivided.dickinson.edu/index.php/node/23581.