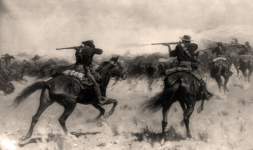 05/02/1859
Company I of the Second Cavalry, with Captain Albert G. Brackett in command, had left Fort Lancaster in the Texas Hill Country on April 19, 1859 to carry out an extended scout of Comanche trails.  After a sapping march into the Big Bend Country in which rations and water ran short, the force encountered a large group of Comanche and defeated them without suffering casualties. (By John Osborne)
Source Citation
"The Army and the Indians," New York Times, November 18, 1859, p. 3.
How to Cite This Page: "Long-range patrol in force from the Second Cavalry defeats Comanche war party in south Texas," House Divided: The Civil War Research Engine at Dickinson College, https://hd.housedivided.dickinson.edu/index.php/node/28863.