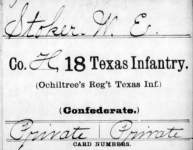 05/06/1862
William Elisha Stoker was not among the 25,000 Texans who volunteered for service as the Civil War started. The Confederate government authorized a draft in February 1862 and Stoker entered Company H of the 18th Texas Infantry in May. His letters suggest he was conscripted. Stoker’s company marched to Arkansas over the summer of 1862, arriving by September, although they were not issued combat rifles until November. (By Don Sailer)
How to Cite This Page: "William Stoker enters Company H of the 18th Texas Infantry in Jefferson, Texas," House Divided: The Civil War Research Engine at Dickinson College, https://hd.housedivided.dickinson.edu/index.php/node/28965.