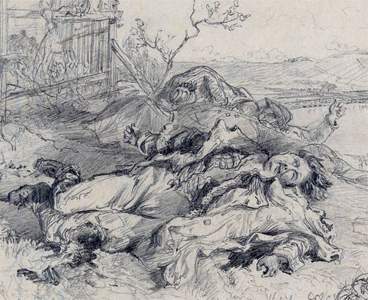 William Elisha Stoker was an ordinary Texas farmer who found himself caught up in the turmoil of the Civil War. Stoker was born in Alabama in 1837 and lost his father when he was only a small child. His mother remarried to a man named McKissack, and the extended family soon moved to Georgia and then east Texas where they farmed and owned slaves. In his early twenties, Stoker met and married a young woman named Elizabeth or Betty. In 1860, they had a daughter Priscilla born just after the presidential election that resulted in Abraham Lincoln's victory. The records are unclear, but the couple may have also had a son named Enoch who died as an infant in 1862. That was the year that William Stoker entered the Confederate army, but again, the records are uncertain and appear to suggest that he had been drafted into the 18th Texas Infantry, Company H during the spring of 1862. Stoker’s unit was part of General John Walker’s Texas Division which soon developed a reputation as one of the toughest fighting forces in the Trans-Mississippi region. Stoker saw action during the Vicksburg and Red River campaigns and was apparently mortally wounded at the Battle of Jenkins Ferry in 1864. Confederate Private William Stoker left behind a collection of more than thirty letters that vividly described his wartime experiences and repeatedly expressed his deepest desire to return to his wife and daughter in Upshur County. (By Matthew Pinsker)
Life Span
05/06/1837 to 05/15/1864
Dickinson Connection
Flavel C. Barber (Class of 1850) was a Confederate soldier and diarist who also served in the Vicksburg campaign and other engagements in the western theater
How to Cite This Page: "Stoker, William Elisha," House Divided: The Civil War Research Engine at Dickinson College, https://hd.housedivided.dickinson.edu/index.php/node/26183.