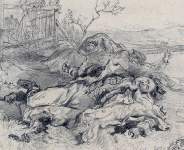 05/15/1864
Private William Stoker’s half brother Thomas McKissack informed Elizabeth Stoker in a short letter dated May 7, 1864 that her husband had been shot in the chest during the Battle of Jenkins' Ferry on April 30, 1864. Thomas was hopeful, or at least appeared to be in the note. “I think he will get over it…[and] he said he would come home as quick as he could,” he wrote gently. William Stoker, however, never returned home to his wife and daughter. He was one of the nation’s more than 620,000 casualties of war. (By Don Sailer)
Source Citation
Thomas F. McKissack to Elizabeth E. Stoker, May 7, 1864, William E. Stoker Papers, National Civil War Museum, Harrisburg, PA.
How to Cite This Page: "Private William Stoker dies sometime after the Battle of Jenkins' Ferry in May 1864," House Divided: The Civil War Research Engine at Dickinson College, https://hd.housedivided.dickinson.edu/index.php/node/28967.