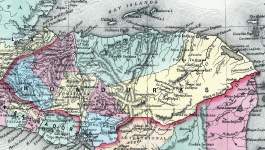 11/28/1859
Signed at Comayagua, Honduras, this treaty concerned the Bay Islands, the Mosquito Coast, and the native inhabitants who lived there.  The British were essentially ceding the area to Honduras and the treaty was to guarantee the territory would not be ceded to anyone else, the native population would be respected and educated, and the rights of British subjects who remained would be protected.  Another treaty concerning the Mosquito Indians was signed with Nicaragua in 1860.  (By John Osborne)
Source Citation
The Secretary of State, The Clayton-Bulwer Treaty and the Monroe Doctrine .... Dated May 8, 1882 (Washington, D.C.: Government Printing Office, 1882), 148-151.
How to Cite This Page: "British sign treaty with Honduras concerning the Mosquito Coast," House Divided: The Civil War Research Engine at Dickinson College, https://hd.housedivided.dickinson.edu/index.php/node/29963.