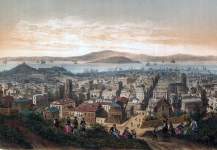 03/24/1860
The clipper ship Andrew Jackson, with Captain John Williams in command, sailed from New York City on Christmas Day, 1859 and arrived at San Francisco after a 89 day voyage.  This broke the previous record set by the clipper Flying Cloud in 1854 by four hours.  The record was disputed, however, as the Andrew Jackson had experienced a delay in getting a pilot boat out of the harbor after lifting anchor in New York.  (By John Osborne)
Source Citation
Gordon c. Roadarmel, "Some California Dates of 1860," California Historical Society Quarterly, Vol. 38, No. 4 (Dec., 1959), p. 332.
How to Cite This Page: "Clipper ship sails from New York to San Francisco in record time," House Divided: The Civil War Research Engine at Dickinson College, https://hd.housedivided.dickinson.edu/index.php/node/31308.