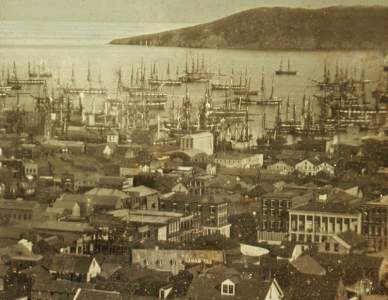 San Francisco, Ca..... From its local situation in reference to the gold region, San Francisco must always remain the great seat of the ocean trade of California. Already it has extensive mercantile communications with all parts of the world. It is connected with New York by two lines of steam packets, one by the way of Panama, making the distance in about four weeks, a packet leaving either city every fortnight, and carrying the mail; the other, also a semi-monthly line, by the Lake Nicaragua, which accomplishes the distance in about four days' less time. The shortest passage from San Francisco to New York has been 21 days. (Gazetteer of the United States of America, 1854)
How to Cite This Page: "San Francisco, CA," House Divided: The Civil War Research Engine at Dickinson College, https://hd.housedivided.dickinson.edu/index.php/node/9531.