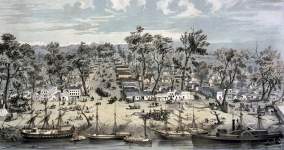 04/15/1860
In the state capitol at Sacramento, California, John C. Bell, a thirty-five year old Democratic assemblyman from El Dorado, had been shot and stabbed in the Assembly chamber four days before and died of his wounds.  His assailant was a lobbyist named Dr. W.H. Stone, a native of Kentucky who was critical of Bell for holding up the creation of a new county. They had argued and Stone had shot Bell once and then stabbed him five times.  (By John Osborne)
Source Citation
"New From California: A Legislator Shot and Killed by a Lobby-Man," New York Times, May 12, 1860, p. 3.
How to Cite This Page: "A California legislator shot and stabbed by a lobbyist on the floor of the Assembly dies of his wounds," House Divided: The Civil War Research Engine at Dickinson College, https://hd.housedivided.dickinson.edu/index.php/node/31996.