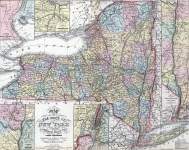 06/02/1860
New York City police and enthusiasts of illegal prize fighting in the city had been matching wits for a time.  An attempt to stage a contest between well known boxers King and Woods was planned for the early hours on Long Island.  Police were waiting and, despite resistance from a large crowd that forced the police to draw revolvers, the fight was prevented and the two boxers placed under a $500 bond to "keep the peace."  (By John Osborne)
Source Citation
"The Prize Ring," New York Times, June 4, 1860, p. 1.
How to Cite This Page: "On Long Island, police battle large crowds to prevent an illegal prize fight," House Divided: The Civil War Research Engine at Dickinson College, https://hd.housedivided.dickinson.edu/index.php/node/32200.