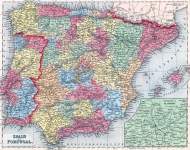 06/16/1860
An unsuccessful Carlist uprising in Spain in late April had resulted in the arrest of the Carlist pretender, Carlos, Count Montemolin and his brother on the northern coast of Catalonia.  The two men, to save their lives, abdicated their rights to the throne and were released.  Safe in Germany seven weeks later, the Count and his brother retracted their renunciation. (By John Osborne)
Source Citation
The Rambler, Volume III New Series (London: Burns and Lambert, 1860), 279.
How to Cite This Page: "Carlist pretender Don Carlos, Count Montemolin retracts his renunciation of Spanish throne," House Divided: The Civil War Research Engine at Dickinson College, https://hd.housedivided.dickinson.edu/index.php/node/32252.