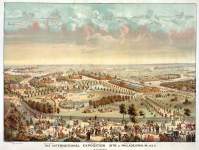 05/10/1876 - 11/10/1876
From May 10, 1876 to November 10, 1876 the United States celebrated the 100th anniversary of the signing of the Declaration of Independence in Philadelphia, Pennsylvania in the country’s first world fair. Formally known as International Exhibition of Arts, Manufactures, and products of the Soil and Mine, the Centennial Exposition attracted approximately 10 million visitors over its six-month duration. (By Rebecca Solnit)
How to Cite This Page: "The Centennial Exposition runs in Philadelphia, Pennsylvania," House Divided: The Civil War Research Engine at Dickinson College, https://hd.housedivided.dickinson.edu/index.php/node/32993.