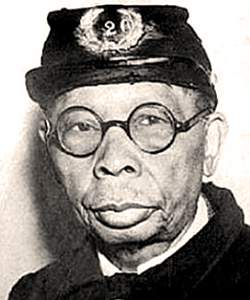 Ephraim Slaughter was born in 1846 and lived in Hertford County, North Carolina as a slave of the H.D. Slaughter family until escaping in 1863. On January, 17, 1864, he joined Company B of the 3rd North Carolina Colored Infantry, which was renumbered as the 37th United States Colored Troops, using the name Ephraim Newsome. Escaped slaves often enlisted under assumed names, fearing complications should they be captured. After the war, he and his older brother moved to Harrisburg, Pennsylvania, where he married his first wife Carrie in 1880. He was employed for some years at the Lochiel Hotel in Harrisburg. After Carrie's death, he married in 1935 Georgiana Williams Mitchell, a 46 year old widow with a grown son. In retirement, he was honored with frequent invitations to Civil War commemorations such as those at Gettysburg in 1938 when President Roosevelt dedicated the Peace Memorial, although he was not allowed then to participate in specific gatherings of white veterans, Confederate or Union. Living with Georgiana on Capital Street, he was an active member of the African-American Grand Army of the Republic, David Stevens Post 520 and of the congregation of the A.M.E. Zion Church on North Sixth Street. Ephraim Slaughter died on February 17, 1943 at the age of 95 as one of the city's last surviving Civil War soldiers, and was buried with honors in Lincoln Cemetery in Penbrook, Pennsylvania. The Harrisburg American Legion Post 733 has since been named in Ephraim Slaughter’s honor. (By Brenna McKelvey)
Life Span
01/01/1846 to 02/17/1943
How to Cite This Page: "Slaughter, Ephraim," House Divided: The Civil War Research Engine at Dickinson College, https://hd.housedivided.dickinson.edu/index.php/node/33423.