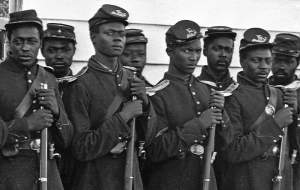 Over 180,000 black men fought for the Union army during the Civil War. Most of them served in the United States Colored Troops (USCT) which came into existence after the Emancipation Proclamation finally provided presidential endorsement for the much-discussed proposals for arming free blacks and former slaves in what had become the great conflict over slavery. USCT training camps in places such as Camp William Penn, located in historic La Mott (Cheltenham, Pa), provided skills and a new sense of identity to black soldiers, despite unequal pay with white soldiers and other forms of continuing discrimination in a segregated military.  More than 11,000 black soldiers mobilized for service from Camp William Penn. (By Matthew Pinsker)
On
How to Cite This Page: "United States Colored Troops," House Divided: The Civil War Research Engine at Dickinson College, https://hd.housedivided.dickinson.edu/index.php/node/32496.