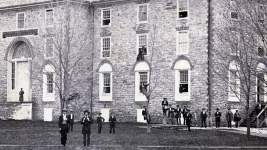 10/22/1860
In Carlisle, Pennsylvania, at the weekly faculty meeting at Dickinson College, the only recorded item of business was that "Fredericks [John Durell Frederick, '64] ...being found intoxicated.  He was found also to be neglecting his recitations." He was awarded "minus marks" that placed him perilously close to expulsion.  The nineteen-year-old did not finish his degree and became a photographer and father of six in Waynesboro, Pennsylvania.  (By John Osborne)
Source Citation
Minutes of the Faculty of Dickinson College for October 22, 1860, Archives and Special Collections, Dickinson College, Carlisle, Pennsylvania
How to Cite This Page: "Dickinson student, John F. Frederick '64, takes another drunken step towards ending his college career," House Divided: The Civil War Research Engine at Dickinson College, https://hd.housedivided.dickinson.edu/index.php/node/34396.