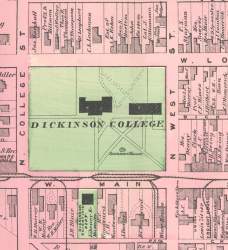 Chartered in September 1783, Dickinson College was originally a Presbyterian school that re-opened in 1834 under Methodist auspices. The following decades saw the institution produce and influence hundreds of young men who spread all across the American continent and into the halls of government. Little more than twenty miles above the Mason-Dixon Line, the college was also one of the few antebellum American institutions that remained about evenly divided in its membership between northerners and southerners. (By Matthew Pinsker)