In Louisville, Kentucky, a large Unionist meeting resolves to support the Constitution and seek compromise 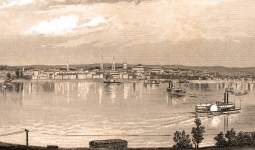 11/26/1860
A large meeting was held at the Louisville, Kentucky city hall in the evening.  James Guthrie, former Secretary of the Treasury, Democratic presidential candidate, and a slaveholder, told the crowd there was nothing to fear from Abraham Lincoln since he was fettered by the House and Senate. The meeting passed resolutions to support the Union, the Constitution, and to enforce all laws, including the federal Fugitive Slave Act.  (By John Osborne)
Source Citation
The Union meeting in Louisville," New York Times, December 1, 1860
How to Cite This Page: "In Louisville, Kentucky, a large Unionist meeting resolves to support the Constitution and seek compromise," House Divided: The Civil War Research Engine at Dickinson College, https://hd.housedivided.dickinson.edu/index.php/node/34747.