Georgia secedes from the Union 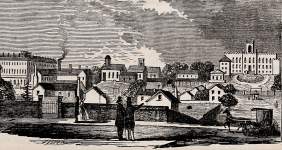 01/19/1861
The 296 delegates to Georgia's secession convention had assembled three days before in the state capital of Milledgeville, with former governor George W. Crawford in the chair.  On this day the convention voted in a final vote of  208 to 89 on an ordinance of secession. An attempt from A. H. Stephens, Hershel V. Johnson, and others to postpone action failed and Georgia was proclaimed officially to have left the Union.  (By John Osborne)
Source Citation
Benson J. Lossing, Pictorial History of the Civil War in the United States of America (Mansfield, OH: Estill & Co., 1866), 178.
How to Cite This Page: "Georgia secedes from the Union," House Divided: The Civil War Research Engine at Dickinson College, https://hd.housedivided.dickinson.edu/index.php/node/35309.