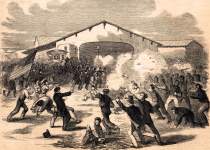 04/19/1861
The Sixth Massachusetts Regiment left Philadelphia in the morning for Washington DC and, while crossing Baltimore between railroad depots, were attacked by southern sympathizing rioters.  They reached their train to the capital but not before they had suffered three killed, others wounded, and had opened fire in response, killing thirteen rioters.  Pennsylvania troops, however, were forced to return to Philadelphia.  (By John Osborne)
Source Citation
Thomas Scharf and Thompson Wescott, History of Philadelphia 1609-1884, in three volumes (Philadelphia, PA: L.H. Everts & Co., 1884), I: 758.
How to Cite This Page: "Baltimore rioters mount a deadly attack on the Sixth Massachusetts in the streets of the city," House Divided: The Civil War Research Engine at Dickinson College, https://hd.housedivided.dickinson.edu/index.php/node/35949.