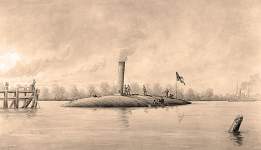 10/12/1861
Just before dawn, the C.S.S. Manassas, an armored ram, followed by three small fireships, struck at the U.S. Navy fleet blockading the Southwest Pass of the Mississippi below New Orleans. The Manassas stove in part of the U.S.S. Richmond's hull but damaged herself in so doing.  The entire Union squadron of six ships ran aground retreating from the fireships.  All were towed off the next day and no casualties were reported on either side.  (By John Osborne)
Source Citation
Chronicles of the Great Rebellion Against the United States of America (Philadelphia, PA: A. Winch, 1867), 13.
How to Cite This Page: "Confederate naval units stage a dawn attack on the U.S. Navy squadron blockading New Orleans," House Divided: The Civil War Research Engine at Dickinson College, https://hd.housedivided.dickinson.edu/index.php/node/38089.