Editor of a Southern-leaning newspaper tarred and feathered in Haverhill, Massachusetts 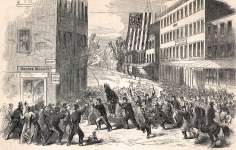 08/19/1861
The editorials of Ambrose L. Kimball in the Essex Democrat had been causing consternation in Haverhill, Massachusetts for their perceived Southern leanings.  Around nine p.m., a mob gathered, took Kimball from his house at gunpoint, stripped him, then tarred and feathered him. He was paraded in the town on a rail, forced to cheer the national flag, and obliged to kneel and swear a loyalty oath.  He was then released.  (By John Osborne)
Source Citation
"The Suppression of a Rebel Journal," New York Times, August 22, 1861.
How to Cite This Page: "Editor of a Southern-leaning newspaper tarred and feathered in Haverhill, Massachusetts," House Divided: The Civil War Research Engine at Dickinson College, https://hd.housedivided.dickinson.edu/index.php/node/38236.