In Hampton Roads, the Virginia and the Monitor pound each other in the first ever battle between ironclads 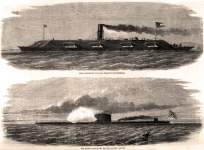 03/09/1862
The U.S.S. Monitor had arrived on the evening of the devastating Confederate attack on the blockading fleet off Newport News. Under Lieutenant John Worden, she waited the night with the stricken U.S.S. Minnesota.  In the morning, the Merrimack, rechristened as the C.S.S. Virginia, reappeared and a long cannon battle between the two revolutionary warships ensued, the first ever between ironclads.  After several hours of the engagement, with both vessels only slightly damaged, the Virginia turned for home. The two ships never met again.  (By John Osborne)
Source Citation
Chronicles of the Great Rebellion Against the United States of America (Philadelphia, PA: A. Winch, 1867), 21.
How to Cite This Page: "In Hampton Roads, the Virginia and the Monitor pound each other in the first ever battle between ironclads," House Divided: The Civil War Research Engine at Dickinson College, https://hd.housedivided.dickinson.edu/index.php/node/38855.