In Atlanta, seven Union raiders from the failed attack on the Georgia rail system are hanged as spies 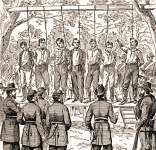 06/18/1862
Most of those who volunteered to aid James J. Andrews in his daring assault on the Georgia railroads were soldiers from Ohio Regiments.  When they were captured following the failed raid, William Campbell, the only other civilian, George D. Wilson, Marion A. Ross, Perry Shadrack, all of the 2nd Ohio, and Samuel Slavens, Samuel Roberts of the 33rd Ohio, together with John Scott of the 21st, were all tried in a military court as spies.  On a bright Atlanta day, they were informed of the sentence of death and hanged together several hours later. (By John Osborne)
Source Citation
William Pittender, The Great Locomotive Chase: A History of the Andrews Railroad Raid into Georgia in 1862 (New York: Jones and Stanley, 1893), 288-289.
How to Cite This Page: "In Atlanta, seven Union raiders from the failed attack on the Georgia rail system are hanged as spies," House Divided: The Civil War Research Engine at Dickinson College, https://hd.housedivided.dickinson.edu/index.php/node/39037.