In Tennessee, Julius Mileke, Union Army deserter, is executed at a public crossroads outside Nashville 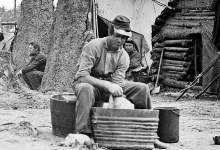 05/15/1863
German-born Julius Mileke had deserted from the 10th Michigan Volunteer Infantry, enlisted again elsewhere, collected his bounty, and deserted once more, before being arrested in Louisville, Kentucky. He was shot by firing squad at noon, seated on his coffin at a crossroads outside of Nashville before a large group of soldiers and onlookers.  His reported last words, in German, were "Take good aim, men. All is over now."  (By John Osborne)
Source Citation
"Shooting a Deserter," Chicago Tribune, May 20, 1863, p. 3.
How to Cite This Page: "In Tennessee, Julius Mileke, Union Army deserter, is executed at a public crossroads outside Nashville," House Divided: The Civil War Research Engine at Dickinson College, https://hd.housedivided.dickinson.edu/index.php/node/39554.