On the Mississippi, the Union's Army of the Tennessee completely surrounds Vicksburg 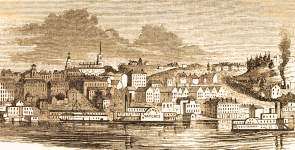 05/18/1863
In a series of sharp encounters after crossing the Mississippi at the start of the month, General U.S. Grant's troops had advanced towards the key Mississippi River strongpoint of Vicksburg.  Crossing the Big Black River behind the city on pontoons, Union forces were able to surround Vicksburg and prepare for an immediate infantry assault, which began the next day.  All attacks would fail, though, and Vicksburg held out till July 4, 1863.  (By John Osborne)
Source Citation
Michael B. Ballard, Vicksburg: The Campaign That Opened the Mississippi (Chapel Hill: University of North Carolina Press, 2004), 143.
Chronicles of the Great Rebellion Against the United States of America ... (Philadelphia, A. Winch, 1867), 55.
How to Cite This Page: "On the Mississippi, the Union's Army of the Tennessee completely surrounds Vicksburg," House Divided: The Civil War Research Engine at Dickinson College, https://hd.housedivided.dickinson.edu/index.php/node/39722.