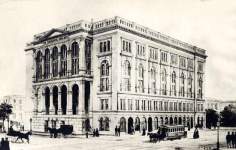 06/03/1863
Opponents of the war assembled at the Cooper Union in New York City for an evening convention.  The main meeting was held in the Union's main hall and other venues were scattered around the square outside.  Speeches were heard from former city mayor Fernando Wood, the sitting Attorney General of Delaware, Alfred Wooten, and other, mostly New York, figures prominent in the Democratic Party.  (By John Osborne)
Source Citation
"The Peace Party: The Wood-Vallandigham Faction in Convention," New York Times, June 4, 1863, p. 1.
How to Cite This Page: "Opponents of the war hold a Peace Convention at the Cooper Union in New York City," House Divided: The Civil War Research Engine at Dickinson College, https://hd.housedivided.dickinson.edu/index.php/node/39784.