The U.S.S. Niagara visits Dover on the English coast to drop off a captured British crew 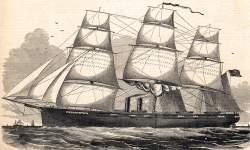 08/24/1864
The Niagara had seized the former Confederate raider Georgia outside Lisbon as she set about her first charter, with the Portuguese government, after the Confederacy had sold her to a Liverpool shipping company. Captured with their ship, her captain and thirty-three man British crew were well-treated and dropped off at the English Channel port of Dover. The Georgia herself was already sailing with a prize crew to Boston.  (By John Osborne)
Source Citation
Chronicle, The Annual Register or a View of the History and Politics of the Year 1864 (London: F. & J. Rivington, 1865), 127-128.
How to Cite This Page: "The U.S.S. Niagara visits Dover on the English coast to drop off a captured British crew," House Divided: The Civil War Research Engine at Dickinson College, https://hd.housedivided.dickinson.edu/index.php/node/41787.