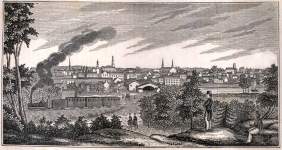 04/02/1865
After months of siege and costly maneuvering in its defense, Confederate General Robert E. Lee was at last convinced that his final efforts to defend the city of Petersburg, Virginia had failed and ordered the city's evacuation. Stores of tobacco and cotton, along with the Norfork Railroad Depot were destroyed and the last of Lee's troops crossed the Appomattox River and began their attempt to regroup at Danville, Virginia. (By John Osborne)
Source Citation
John Ashton Cannon, History of Grant's Campaign for the capture of Richmond (1864-1865) ... (London: Longmans, Green, and Company, 1869), 422.
How to Cite This Page: "After 292 days of Union siege, General Robert E. Lee orders the evacuation of Petersburg, Virginia," House Divided: The Civil War Research Engine at Dickinson College, https://hd.housedivided.dickinson.edu/index.php/node/43711.