Recently captured Mobile, Alabama is rocked with a massive explosion that kills hundreds 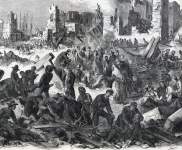 05/25/1865
Much of the town of Mobile, Alabama was devastated in a massive explosion of an reported twenty tons of gunpowder and numerous artillery shells, largely captured in the recent Union occupation, at Marshall's Warehouse at Lipscomb and Commercial Streets in the city. The blast left a massive crater that remained visible for years.  The accidental explosion then set off fires that burned much of the northern section of the town.  The disaster killed an estimated three hundred people and injured scores of others.  (By John Osborne)
Source Citation
Chronicles of the Great Rebellion Against the United States of America ... (Philadelphia, A. Winch, 1867), 107.
How to Cite This Page: "Recently captured Mobile, Alabama is rocked with a massive explosion that kills hundreds," House Divided: The Civil War Research Engine at Dickinson College, https://hd.housedivided.dickinson.edu/index.php/node/44020.